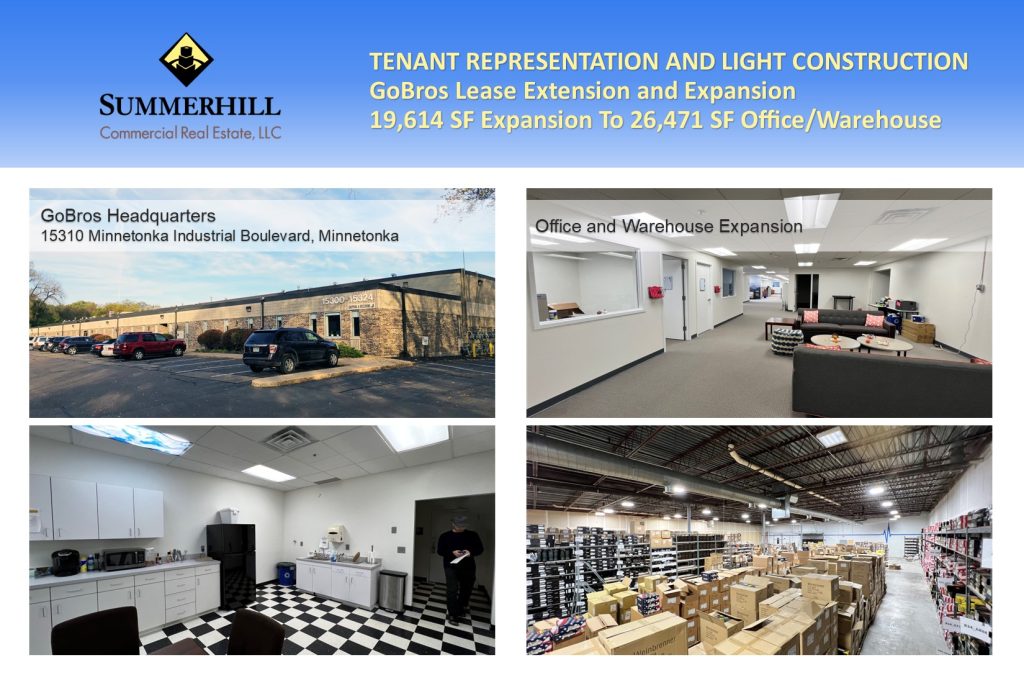 We are happy to announce the successful representation of our client GoBros, LLC in an extension and expansion of their office warehouse space in Minnetonka MN. GoBros expanded from 19,614 sf of office warehouse to 26,471 sf of office warehouse with a 5 year lease term. Peter Kordonowy was the Tenant Representative in the Lease extension and expansion negotiation and being familiar with the building, Patrick Lensing and Peter Kordonowy also provided light construction general contracting services as well to its client as a value add on an open book, cost plus basis, with multiple bids. Patrick, Senior Property Manager with Summerhill, had previously managed the building, and also had a good working relationship with GoBros, LLC, and was able to take on primary responsibility for the general contracting duties, which have now been completed to the client’s satisfaction, and on budget.

Peter has represented GoBros as their Tenant Rep when they moved into Minco 300 at 15310 Minnetonka Industrial Road in Minnetonka MN in 2016. The original space consisted of 12,985 square foot of office/warehouse. Subsequently, GoBros had expanded into an additional 6,629 square feet of office/warehouse in 2017 creating a total leased premises of 19,614 square feet. GoBros, LLC is a locally owned e-commerce company specializing in selling many extensive lines of well know quality and premium socks as well as a variety of other products, including footwear.

With GoBros steady growth, they were in need of more space for current and future needs. The Minco Industrial Portfolio that GoBros is in was sold in early 2022 to a new Landlord, and Peter was engaged to represent its client GoBros in its negotiations with the Landlord for a further extension and expansion of GoBros space which resulted in a new leased premises of approximately 26,471 square feet. The Landlord was represented by Tom Bennett and Tom Hayhoe with CB Richard Ellis in this deal.

GoBros had over 2 years left on their then current lease. On behalf of GoBros, a relatively complex win/win transaction was concluded which involved GoBros giving back a bay on one side of their space and adding a double bay on the other of their space. The lease on their remaining space was extended 3 years, and their new double bay expansion space lease term was 5 years.

The total cost of the construction project ended up being just over $110,000, a majority of which was paid for by Landlord as part of the negotiated new lease transaction. Although the rents in the building had increased due to market conditions for this type of space, a deal was ultimately finalized that created a good solution for Summerhill’s client, GoBros, LLC, and at a cost they could afford, and with a buildout allowance that gave them the space they needed. GoBros’ new space configuration has been working great for them, and will likely meet their needs for the next five (5) years. Downturns in Commercial Real Estate: What You Need to Know